An Unsuitable Boy by Karan Johar (With Poonam Saxena)

I picked up An Unsuitable Boy with some amount of excitement because I like Karan Johar. There, I said it. I like Karan Johar and I like his films, well most of them. But more than his films I like his off-screen persona. His interviews are fun to watch. He’s funny, warm and articulate and completely at ease with himself.

If someone can speak well, I figured, he could write well too. And I wasn’t too wrong.

What I loved about the book

In An Unsuitable Boy Karan Johar talks to you through the pages. The writing flows like an easy conversation, simple, honest and straightforward.

He talks about his rather difficult childhood, his problems with weight, his introverted personality, his effeminate mannerisms, his not being good at anything and then of the turnaround – how he made friends, found his feet and finally, quite by chance, found his calling in life. I felt for him – the pressure of being not good enough despite belonging to a privileged family – I got that.

I’d already heard a lot of his story in bits and pieces through his numerous interviews and talk shows. Reading it in the pages of the book was like revisiting his childhood with him. He goes on to talk about his entry into the world of films. We get a huge slice of behind the scene action during the making of Dilwale Dulhaniya, Kuchh Kuchh, K3G and other Dharma films right from how the story was conceptualised, the dialogues written and the costumes organised. That was quite a treat.

He makes for compelling reading, touching just the right chords with his self-effacing story-telling and his honesty.

And then the second half happened…

The conversation turns into a ramble, self-effacing turns self-congratulatory and the story-telling turns tedious, self-indulgent and oh so repetitive.

Over and over again he talks of Aditya Chopra, Shah Rukh, Niranjan, Apoorva and a host  of other friends. I understand they were instrumental in his journey and he wants to give them credit, but that’s where the book loses its connect and becomes one long haze that means little to the reader.

He goes on to comment on love and sex as also the future of Bollywood – all of that remains a monotonous commentary. The narration too gets haphazard and clumsy. I am left wondering why on earth didn’t the editor do anything about it?

However, despite the shortcomings the one thing that stands out is the complete honesty with which he has penned this memoir laying bare his most secret demons. 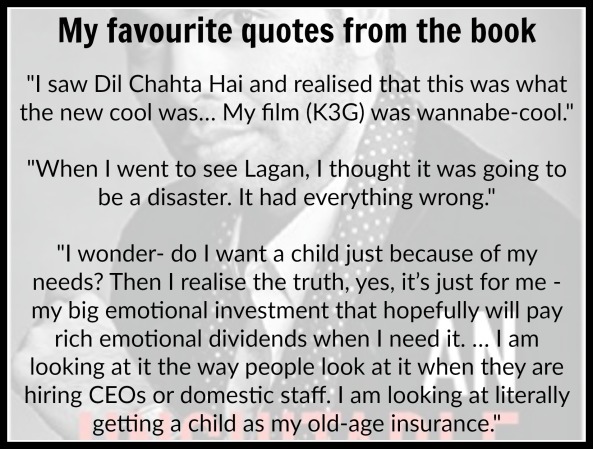 Told you he was honest!

Last word: If you like Karan Johar you should give this a shot.

31 Replies to “An Unsuitable Boy – A Review”