‘Go away. We are in the middle of a game,’ said Rishabh as soon as he saw Raina approaching the field.

Not again, sighed Rishabh. As if living with a twin sister wasn’t bad enough, she must now follow him to the playground and embarrass him before his friends, he fumed.

The ‘friends’ were a group of older boys. It was after months of hanging at the sidelines that he had been given entry into this elite big boys’ football club and now here she was spoiling everything. Personally, he liked playing with Raina. They had spent the entire vacation fooling around with the ball and he had to admit, she was darned good at the game.

He knew, however, the other boys would never let her join in. I wish she’d just disappear, thought he.

But that was not to be.

She walked right into the field and stood there more real than ever, her hands at her waist, chin stuck out stubbornly, bringing the game to a standstill.

‘I want to play too,’ she announced.

The boys, some eight or ten of them, walked up and surrounded her.

‘Go away girl, just because your mom bought you a jersey, doesn’t mean you can play football,’ taunted one of them.
The others laughed.
‘Football has nothing to do with clothes’, she shot back.
‘Let her be’, Rishabh rushed to her defence, ‘Go away Raina, please.’

His irritation was now tinged with concern and a tiny note of pleading crept into his voice. He stood there, looking from the boys to Raina, torn between standing up for his sister and siding with his friends, hoping she would just go away.

‘I’m not going anywhere,’ said she, reading his thoughts. You know I’m good Ri, tell them.’
‘It’s a boy’s game,’ said Sharman, the tallest of the lot, flexing his shoulders.
‘No it isn’t. The game belongs to anyone who knows how to kick a ball,’ Raina maintained.
‘Well then shoot a goal and show us what you’ve got’, said he pointing slyly to the goal post at the far end of the field.
‘Hey that’s not fair’, protested Rishabh. It’s way too far, even for you.’
‘Shut up, big brother,’ said Sharman, ‘Go on girl, kick the ball and own the game.’

Stupid, stupid, stupid Raina, thought Rishabh, she’ll never be able do it and then we’ll both be sitting in the stands forever.

But Raina was already tightening her laces with a determined look on her face. This was war, and she was going to win it. She ignored the mocking glances of the other boys as well as the anxious one of her brother.

She stepped back a few paces, took a short run up positioning her foot so that the inside of her shoe made contact with the ball. And she kicked with all she had, just like she’d watched Messi go for it hundreds of times. The ball rose up obediently in a glorious curl and smashed into the goal post shattering all stereotypes into a thousand tiny pieces.

Written for the prompt ‘War and Pieces’ for Day 4 of the second edition of the fortnight-long Bar-a-thon. 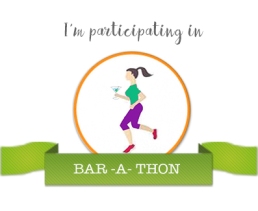