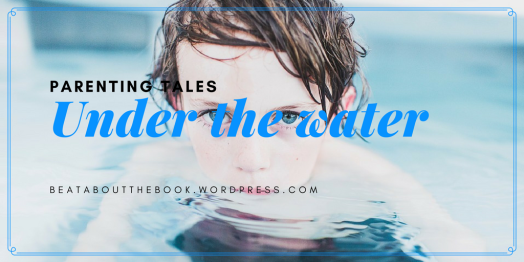 ‘You’d never believe me if I told you that I can breathe under water, but it’s true and I can prove it,’ Jai said earnestly.

She sighed! She had absolutely no will to have this conversation. She glanced at her son’s stubborn face, ready to argue till his last breath, and she let out another sigh.

It had been an exhausting week at work and she had been looking forward to this weekend getaway with Sumit and Jai, her three-year-old. It was visions of a quiet sunlit pool that had kept her going through the week. And now this!

She glanced over at her husband sprawled on a deckchair, his face hidden behind a book, then looked back at Jai.

‘Baby, you can’t breathe under water. Humans can’t.’
‘I can.’
‘Only fish can breathe under water, darling. You need special things called gills to do that. Humans don’t have any.’
‘I don’t need gills. I can breathe without them. Some people can do things that no one else can. You remember how you could open that jar of Horlicks which I couldn’t? And Spiderman stopped a whole train. Krishna lifted a mountain. It’s just like that.’

She cursed all the superheroes of the world who had sprung up recently in her three-year-old’s life and filled it with new and interesting possibilities. She knelt down to him and, struggling to keep all traces of annoyance out of her voice, she tried again.

‘That’s different. That’s about strength. You will be able to open that jar when you are older. Tales of Spiderman and Krishna are just stories, but you’ll never grow gills,’ she said.
‘You’re not even listening to me. I told you I don’t need gills. I can breathe without them. I can prove it. I can. The other day I put my nose in the water cup for one whole minute and I didn’t even drown.’

She looked at her three-year-old with utter frustration and found her frustration mirrored right back on his small face. ‘Why don’t you believe me?’ He insisted stamping his feet.

She looked at her husband.

‘Sumit’, she finally called out, ‘can you put down that godforsaken book for a minute and come here?’
‘Hey, what did I do?’ said he peeking from behind his book.
‘Jai says he can breathe under water and is refusing to wear the tube in the pool,’ she said.
‘I don’t need the silly tube,’  reiterated Jai.

‘Fine,’ said Sumit, ‘let’s do this.’
He put down his book and walked towards Jai. taking his hand he walked down the few steps into the baby pool and gently lowered the little one into the water, tightening his hold on his pudgy hand till Jai was completely submerged. Within two seconds he shot up coughing and sputtering.

Just as a matching smile was beginning to replace her shock, Jai piped up, ‘You know ma, the other day I jumped from the sofa and I actually flew across the room. Really, I did. You’ll never believe me but I can fly. I can prove it’.

She looked at the little earnest face and the still shivering figure of Jai and then at Sumit and they burst out laughing.

25 Replies to “Under the Water”