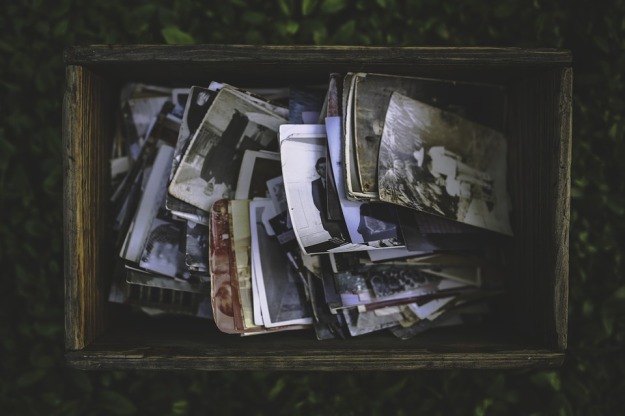 The Municipality officers had been at work all day pumping the water out of her basement and it was only now that she could go down there. It was a mess, a sad sorry mess. She’d take days to clean this out. She sat down on a stool and pulled the cardboard carton towards her. It came away in a soggy mess. Letters, photographs, slam books  tumbled out.

She picked up a photograph: It was hers, as a teen with her sister, she on her tiptoes because somehow the sister, though, younger had managed to shoot up an inch more than her. Another one at the school Sports Day captured by her dad – she was about 8, a butterfly with blue and pink butter-paper wings. She reached out for another one – she and her best friend at the farewell social at school, barely 15, in their mom’s saris, dressed awkwardly but posing like pros, ‘The world is our runway’, she had captioned it. Those were the days…, she smiled.

Her reverie was broken by a cry of ‘Look what I found!’.

She glanced up reluctantly, unwilling to let go of the memories just yet, to see her six-year-old holding up something dripping wet covered with mud and bits of cardboard. One armed Barbies, half-legged astronauts, cotton oozing teddy bears and assorted crayons and colour pencils lay spilt around.

Her son was holding up something, ‘My favourite dart gun!’ he said wiping it lovingly on his shirt.

Oh Lord no – not that one thought she, putting down her photographs and rushing over to him. That gun had been the cause of a million fights, till one day she had hidden it away among the discarded toys and forgotten about it. And now here it was… again.

She glanced at her photographs then sighed and geared up once again for some serious refreeing. No time for mush in a mom’s life!

Written for the Write Tribe Festival of Words June 2018 for the last day of the Challenge – Day 7. The prompt for the day was:
A dark and heavy storm suddenly takes over your neighbourhood, dropping 6 feet of water so quickly that the storm drains can’t handle it. The water flooded your street and your basement, ruining many of your things. As you rummage through your stuff, you are filled with memories. Think about your…