This is one beautiful book.

Girl, Woman, Other charts the lives of twelve British women of colour, their struggles and their wins.

…..Amma’s story, a lesbian theatre person, actor and director. It is the opening night of her feminist play The Last Amazon of Dahomey. Among the audience, we find most of our characters, though we aren’t aware of it just yet. As we turn the pages we are introduced to them in turn.
The narratives overlap sometimes with the women showing up as cameos in others’ stories, taking centre stage in their own.

Amma is there again in the end, wrapping up the book at the After Party of the play along with most of the characters and we get to bid adieu to them all. 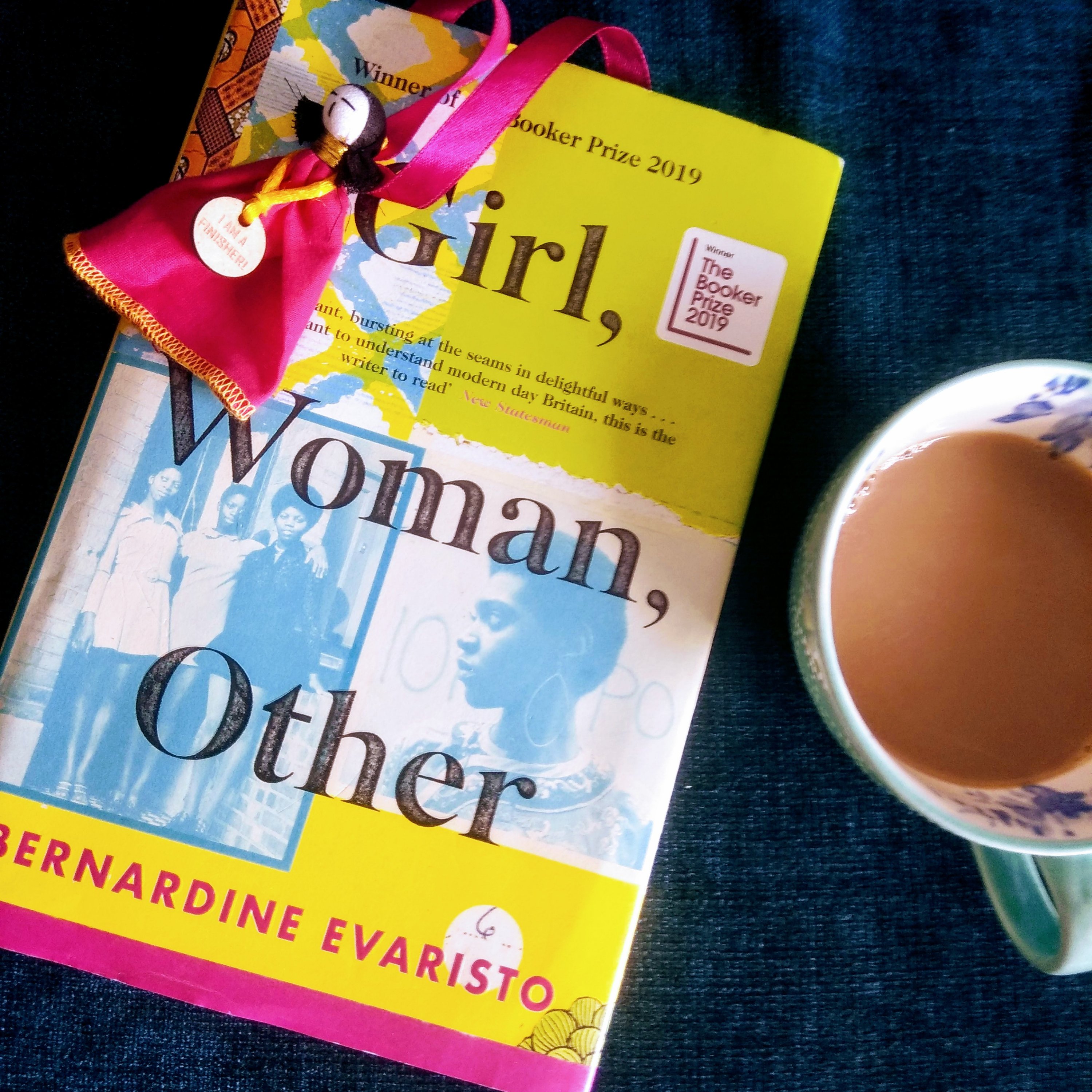 I’ve had this book since December and I’ve started it more than once, then abandoned it each time after a few pages. This time around I decided to stick to it and I’m ever so glad! It evened out after the first fifty pages or so and then on, I found it hard to put it down. Each story is captivating in a whole different way.

…had me lost for a while. Written as poetic prose – prose written and expressed like free-flowing poetry without capitalisation or full stops – it takes a little getting used to. However a few pages down I stopped being hampered by it and began to enjoy its beauty.

The women (and I use that word very loosely)……

…..are flawed. Most of them carry the baggage of prejudices, some due to events in their lives, others purely due to their origin. There’s Bummi, insisting her daughter marry a Nigerian. There’s Shirley a ‘boring’ old school teacher and Carol the banker, successful yet never quite at ease with herself or her identity, no matter where she is. There’s Morgan a social media influencer who refuses to be tied down with man/woman tag. And many more.

I found myself invested in the characters, loving them despite, or perhaps because of their flaws. Evaristo builds each character so that I could see where they were coming from, why they acted a certain way and, when one understands a character, one gets to love them. Not all stories had happy ever afters, not in the conventional sense at least, yet none of them left me feeling dissatisfied.

The book has to be re-read

It just isn’t enough to read it once. I went back and read the first chapter after I finished and then I read Morgans chapter again, because that was my favourite. I will probably be reading bits and pieces, looking for the characters as they enter and exit stories other than their own.

There were some small bits that didn’t quite come together. For instance, there was a part where one of the characters, Morgan, gets into drug addiction, the serious kind. And then one day the reality of his situation sinks in and, while his parents are away on a vacation, he gives it up. Just like that. Evaristo makes it sound easy, too easy. In an almost similar repetitive sequence another character Carol, who seems to have fallen into a depression after she is raped, gets back to normal in the space of a paragraph. ‘I quote: It was like she woke up from like a bad dream..’ with no trigger, no help from anyone, nothing. People change, grow, get a grip on life, I understand that. However for it to happen in a flash seemed improbable.

Also, while I did love the characters, there were a few too many and I was constantly mixing them up, specially in the beginning. As the book progressed, however, they took on personality. Which is why I’ll reiterate, don’t let the beginning of the book stop you from moving ahead.

Despite all of that…

….the book forced me to re-evaluate my thoughts not just on women of colour but on all women, on sexuality and equality and the way people form connections and relationships. It brought home the fact that families come in many forms, that a lesbian woman and a gay man who are friends, can together have a child and that was a family too.

Girl, Woman, Other envelops you like a warm patchwork quilt of engrossing stories.

In one of her interviews, Evarista said she deliberately included twelve women as protagonists, that she wanted to include as many women as she possibly could. If there was a book that dispelled Chimamanda Ngozi Adichie’s fears, of the dangers of a single story, this would very much be it.

Last thought: This booker winner must be read.

22 Replies to “Girl, Woman, Other #BookReview”