If I had a wish to wish for me
I’d go on quite a wishing spree.
I’d ask to get into my favourite tales
Just to make sure they stick to the rails.
A little tweak here, a gentle twist there
And I’d save people from much despair.

When I’d see Romeo at Juliet’s grave
I’d jump right there in time for a save.
And “Thus with a kiss I die” as he says
And to his lips the poison raise,
Stop! Will you! She’s alive, I’d cry
There really is no need for you to die.

And when Darcy’s making his darned proposal
The one that earned Lizzy’s disapproval.
Tread here with plenty of care, I’d advise him
For goodness sake don’t be condescending.
Let your heart talk, the one that loves her
Lose your pride, that really bugs her.

When Scarlett is abandoned by Rhett all alone
I’d tell her he’d be back, he wasn’t all gone.
And while I’m there I’d give her a shake –
It’s him you love though he might be a rake.
Look carefully, will you open your eyes?
it was never Ashley, it’s Rhett who’s your prize .

Perhaps I’d drop by Jeeves for a chat
I’d tell him all my tales and hope for a pat.
He’d give his wise head a supercilious shake
Unimpressed he’d say, ‘That’s a piece of cake’.
Don’t want to spoil your congratulatory party
But I’ve been doing this for years for Bertie.

That’s true of course, his case he does rest,
As a setter-righter of things he’s the best.
All along this time that’s exactly what I’ve wished for
I want to be Jeeves to my favourite characters.

It’s Day 6 of the #BarAThon Challenge from 1st to 7th August 2016.
The prompt for today is ‘Wishful Thinking’.

I am with Team #CrimsonRush

Also linking to  Mackenzie at Reflections from Me

You’re about 15 years old. You’ve just finished reading Pride and Prejudice and you’re in love. You love Mr Darcy. You read and re-read the book till you remember ‘that’ letter word for word. You carry his image in your mind, or…. heart, they’re pretty much one and the same at 15. You feel for Elizabeth. You are Elizabeth. Actually, you are every girl who ever read Pride and Prejudice.

Then you grow up. You mature. You realize Mr Darcy was a teenage crush. Or so you think till along comes Colin Firth. And you fall in love, yet again.. with Mr Darcy. This one remains my favourite Darcy ever.

This is one post I’ve been looking forward to. What? Just because I gave him a miss at the D you thought I forgot? Nah, never. I saved him up to follow Elizabeth. It’s got to be F for Fitzwilliam Darcy from Jane Austen’s Pride and Prejudice. 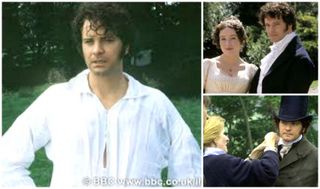 Mr Darcy – two people in one

For most people Mr Darcy is a rich snob. He is critical, proud and pompous. He is unapologetically insensitive and rude. He makes no effort to be friendly; rather, he revels in being unfriendly. The only excuse of his atrocious behavior might be his shyness and the fact that he is socially inept. However, it seems more likely that he considers it a perk of his position – this freedom to be rude to whoever he wants to, which is most people.

Then there’s the other Mr Darcy – The one who is generous and thoughtful, who loves his family, is a kind and considerate employer and knows exactly what to do in a crisis. What’s more, he also loves passionately and doesn’t hesitate to express how he feels, no matter how difficult it is. How many heroes would have the courage and honesty to conquer their ego and propose to the same woman twice?

Had the first Mr Darcy not come wrapped in the whole Pemberley package he would have been booed out of respectable society. Even with Pemberley, all he evokes in the one thinking woman of that time, Elizabeth, is disgust. The second one, the knight in shining armour kind, is the perfect, the make-one-go-weak-in-the-knees kind. But then so are scores of others.

Mr Darcy is special because…

…he is both those people. That is what makes him an endurable figure. A nice man is nice but a not-nice man who turns nice when he falls in love – ummm… that’s the stuff of dreams. What woman can resist a man who she can reform through her ‘love’? Darcy makes Lizzie look good.

What makes him irresistible is :
– that soft heart in an impervious exterior.
– that he isn’t easily available.
– that it takes a special girl to bring out the hero.
– that he places intellect over stunning looks (Jane Bennet) as well as money and position (Caroline Bingley)
Add to the mix his wealth and good looks and he is absolutely divine.

I do have a few doubts though:

One: Would Lizzie have spared him a second glance had he not been rich and handsome?
And two: Does he really change? Or did he simply admit Lizzie (and by extension, her family) into that inner circle where he was always nice while continuing to be his abominable self the world at large?

Ugh! I’ve gone and spoilt him for me with all this analyzing. Need to detox. Off on a P&P drool-fest to undo the damage. What? I meant drooling on the popcorn while watching P&P. What did you think?

It’s a G next week and the it’ll be a man on the blog – not too nice a man maybe, but a very very powerful one. Take a guess, if you can.

Linking up to ABC Wednesday where we’re doing posts on the letter ‘F’. Do drop by and check out other Fabulous posts.