So I woke up early this month, figuratively of course, to find that I was five books behind in my Goodreads Challenge. All through this year I had maintained a steady pace and kept a book or two ahead. But these last few months had been exceptionally trying and I lost touch.

I was pretty freaked out, I do hate backing out on a commitment even if it is to myself. And so I went on a reading frenzy. I am so very glad I took up the Challenge. It proved a great way to get my reading back on track.

I’d set aside a pile of books to read but I put them all away in favour of something light and happy. Something that wouldn’t demand much from me in terms of attention because the children were home and I knew I’d have to be on random call. So I picked up my favourite go-to comfort genre – light romance.

I began with two books I’d picked up during a Books by Weight sale. They’re both fan fiction in a sense – one on my all time favourite book, Pride and Prejudice and the other on a television series I loved, Downton Abbey (My ringtone has been the theme song from the show for a long time). Interestingly, both brought together American and English sensibilities that was fun to read.

While We Were Watching Downton Abbey by Wendy Wax

… is the story of three women living in an upmarket apartment building but very different in their circumstances as well as attitudes. The concierge is a fan of the show  and organises a screening of the first two seasons. He invites the residents for an evening of sampling not just the show but also a bit of British culture. That’s where three women end up connecting and sorting their lives.

Although this is definitely chicklit, it isn’t about twenty something women complaining about bad dates. The women are older, Brooke is a single mom to two kids, finding her feet after her recent separation from her husband, Claire is an empty nester struggling to write a novel while Samantha is someone who marries for security and money and is trying to understand her relationship with her husband. Those individual stories were  interesting. And there was romance too, so that was a bonus.

However the story had nothing to with the series so I was a little disappointed. The title lead me to believe there would be some kind of a connection. Conversely, having watched the show isn’t necessary to enjoy the book, so that could be a plus. As a standalone book, it was a decent enough read.

Me and Mr Darcy by Alexandra Potter

..is my other read. It is the story of a 29 year old American girl Emily who runs a book store. I loved that bit. Any self-respecting female runner-of-a book-store has to be in love with Mr Darcy and so is Emily. The yearning becomes stronger as a result of scores of really bad dates. It’s Christmas and everyone is going away for a holiday and on an impulse (which might have been a nudge by her fairy godmother) she takes up a Jane Austen guided tour. On the bus she realises she’s the only young person around among a sea of silver-haired women other than the rather obnoxious reporter, Spike. He’s out to discover why Mr Darcy remains the heart-throb of women across ages.

While on the tour, Emily encounters Mr Darcy, the real Mr Darcy. The difference between real and fantasy blurs as Mt Darcy begins to fall in love with her.

This is a light easy read if you have nothing else to do. There’s enough humour to keep you going with some really sweet bits. However there’s a supernatural element that didn’t come through and in the end the book ended up as a rather confused mix. It remains a forgettable read.

Oh my one source of annoyance was an Indian character called Parminda. Please, it’s ‘Parminder’. And she’s into yoga. In Goa. Such careless stereotyping puts me off, even though it’s just a small side character.

After these books I went on to read a bunch of others:
Short Stories from Hogwarts of Heroism, Hardship and Dangerous Hobbies by JK Rowling
Ghachar Ghochar by Vivek Shanbagh
Rekha, The Untold Story by Yasser Usman
Letters from Kargil by Diksha Dwivedi
Between the Lines by Jodi Picoult
Origin by Dan Brown
The Rosie Project by Graeme Simsion

That’s nine books in a month! I didn’t even know I was capable of this. And with that I’m all caught up with my challenge. I can now relax and read at a steady pace through December.

So what have you been reading? Did you take up a reading challenge? How’s it going?

Linking up with #Chatty Blogs from Shanaya Tales

And with My Era’s #BookTalk 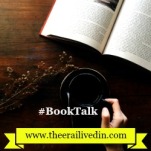 26 Replies to “Two romances and some catching up”